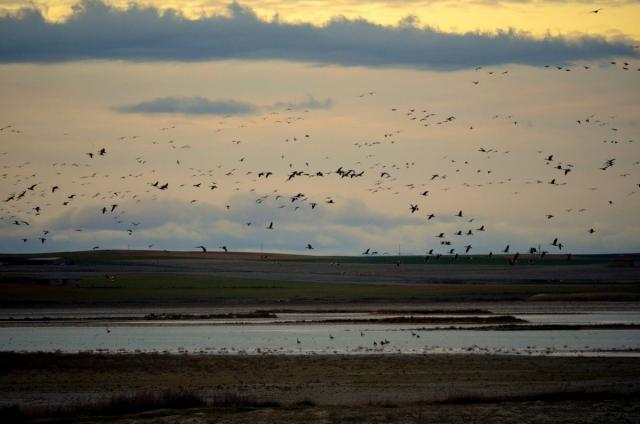 On February 2, a new celebration of World Wetlands Day will be commemorated. The main focus will be on the importance of wetlands for the community. The Wetlands Convention, known as the RAMSAR Convention, has chosen for this year's slogan 'Wetlands and Climate Change'. Castilla y León claims 3,040 hectares of wetlands under this international organization, and The Life MedWetRivers project plays a major role for conservation.

The Park Houses of Castilla y León, have scheduled different activities to commemorate the World Wetlands Day, to be held on Saturday February 2. The centres, managed by the Natural Heritage Foundation, will focus during the activities to enhance on the importance of wetlands and the work they do, in the fight against climate change. The Life MedWetRivers project will have an outstanding presence.

Castilla y León consitutes 3,040 hectares of wetlands divided in two geographical areas. Las Lagunas de Villafáfila, in Zamora, with 2,714 hectares, is the largest in the Community. It is absorbed by the RAMSAR Convention, a convention on wetlands, and is one of the most important in the north of the peninsula and, without a doubt, the most important enclave for waterfowl, steppe and migratory species in Castilla y León. It constitutes of three main lagoons: Salina Grande, Barillos and Salinas and a series of smaller wetlands.

In the province of Palencia there is located in the second wetland: Laguna de la Nava, with 326 hectares, divided into two equal parts. It is a shallow lagoon, with an average depth of 35 centimetres although there are more or less extensive areas with greater depth, which slightly exceed the meter. Due to the artificial nature, the water, coming from the Castilla canal is introduced every year during October, imitating the natural cycle of the lagoon floods: flood in autumn and winter and drying out during the summer.

This World Day is celebrated Since 1971 when the Convention on Wetlands was ratified. It is better known as the RAMSAR Convention, and aims to protect the value of wetlands and the benefits they bring to the wildlife and environment. As every year, a committee decides on a central theme on which all the activities revolve and this time was for 'Wetlands and climate change'.

Wetlands represent 45% of the value that the whole of the natural ecosystems of the whole planet and they  contribute as  a natural solution to the fight against climate change, through mitigation and adaptation, acting as natural filters.

Despite all the reported benefits, more than 60% of the world's wetlands have disappeared since 1900 and their decline continues with acceleration. About 40% of these ecosystems have degraded in the last 40 years, according to data from Wetland Extent Trend.

Ramsar areas are designated after meeting the criteria for the identification of Wetlands of International Importance. The first criteria to be met is that sites that contain representative, rare or unique wetland types, and the others cover sites of international importance for the conservation of biological diversity. These criteria emphasize the importance that the Convention attaches to the maintenance of biodiversity.

Wetlands are vital for life. It is one of the most productive environments in the world, hosting an extremely important biological diversity, and providing the water and resources on which countless species of plants and animals depend for survival and prosperity, as well as helping us to prevent and adapt to the inevitable climate change. There are more than 2,200 Ramsar sites in the world that cover more than 2.1 million square kilometres in 169 countries.

Activities in the Park Houses

On day 2, the Natural Heritage Foundation, in collaboration with the City of Cantalejo, organizes a day of awareness about the natural values ​​of the lagoon complex of Cantalejo. At 10 o'clock, at the Town Council, will be made a presentation of the works to be carried out, for the adaptation of part of the complex. Works which will be made possible thanks  to the agreement signed with La Caixa Foundation. Later, the technicians of the Duero River Basin Authority will give an explanation to the importance of these lagoons in the Duero basin. The scientist of the CSIC and one of the great experts in the management and conservation of wetlands Santos Cirujano, will give a lecture on the continental aquatic flora and vegetation. At 11:30 am a walk in the 'Sotillos Bajeros' proceed and will be interpreted and guided by an expert ornithologist. The activities are free.

House of the Park of La Nava (Palencia)

This centre has scheduled a day of open doors  in which attendees can enjoy this emblematic wetland of Palencia. Lovers of ornithology can observe  the species found in the Laguna de la Nava, thanks to the presence of an ornithological guide at the 'Colada de Carrepalencia' observatory where they will have optical material and field guides to help them identify between the different species. The time foreseen will be from 10 am to 2 pm and from 4 pm to 6 pm. At this same observation point, some birds present in the wetland will be ringed between 10 and 12 o'clock.

The celebration of the day of the wetlands will end with a conference, which will take place at 6:00 pm and will be given by Carlos Zumalacarregui, technician of the Global Nature Foundation. He will speak  about the actions that are being developed in the Natural Space within the framework of the project Life Paludícola.

House of the Park of the Black Lagoon (Soria)

On the 9th this centre in Soria has organized a snowshoe route from the Santa Inés snow resort towards the Laguna Verde. It covers  a distance of 9 km and an approximate duration of 3:30 hours and activity will be carried out with opportune  interpretations; explanations will be given by specialized monitors about the fauna, flora and ethnographic contents of the area. There is a price of 23€ per person. Inscriptions must be made in the mail cp.lagunanegra@patrimonionatural.org.

House of the Park of Riaza (Segovia)

The 50 students of Primero de la E.S.O. (Grade 7) of the Gredos San Diego School - El Escorial will carry out together with the environmental educators of the Casa del Parque, an analysis of water samples from the Riaza River to determine its quality according to physical-chemical parameters. They will learn to make measures such as turbidity, dissolved oxygen, pH, or nitrates, and thanks to biological parameters to identify the state of  the aquatic macroinvertebrates. This action will take place on Monday, February 4.

The centre located in Galende organizes on the 10th a workshop for children to learn about the great importance of wetlands and life in them, with the example of the Sanabria Lake Natural Park, which houses the largest lake of lacier origin in the Peninsula and a lagoon system of plateau equally outstanding.

During the activity, the little ones will be organisd in workshops to construct frogs and their habitat, which will allow them to learn about the different species that inhabit the rivers. After the workshop, accompanied by environmental educators they can walk the botanical path of the House to learn about the aquatic ecosystem through the ponds. The activity will end with an adaptation of a presentation about the Natura Network and the Life MedWetRivers project.

Center of the Capercaillie (León)

This center, located in Caboalles de Arriba, has scheduled the screening of the documentary 'El Carricerín Cejudo en La Nava' on February 2 on the great importance of this wetland in Palencia at 5 pm with free access “first in, first served”.

The Houses of the Park of Puebla de Lillo have programmed two activities related to glacial lakes and their importance in the biodiversity. Starting with an environmental education workshop will be held where some of the glacial lakes of the Picos de Europa Regional Park, such as Lago Ausente, will be presented. This activity will consist of dynamics and self-discovery games that will also show about the animals that live in these types of lakes and their importance in the life cycle.

The second activity will consist of the screening of the documentary 'Leyendas de Agua' from the documentary series Reino Salvaje, which deals with the Lake of Sanabria and the legends it hides. Both activities will be for February 2 throughout the day.

House of the Park of Villafáfila (Zamora)

For day 2 an ornithological initiation workshop and a guided tour through the lagoons of the Casa del Parque have been organized by an expert ornithologist. The workshop consists of a brief theoretical indoor activity in the House and a practical part of bird identification in the park's lagoons.

Learning to identify the most common aquatic birds of the Villafáfila Reserve is the strong part of the journey, but without forgetting the great diversity of birds of prey in the area and of the bustards. The organization will have optical material and bird guides for the participants. The price is 5€ per person and it is necessary to register in advance at cp.villafafila@patrimonionatural.org.