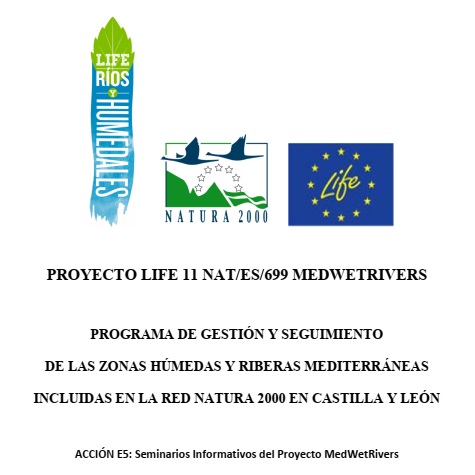 It is important to carry out a continuous dissemination of the project. It must be made known from the beginning for creating interest and a network of contacts, as well as to present the results obtained from the development of the different actions of the project.

Through these information seminars, it is intended to reach a wide range of recipients within the sectors involved in one way or another in the management and monitoring of the Natura 2000  in the Mediterranean area.

It is intended to reach all the provinces of the Mediterranean biogeographic region of Castilla y León and to a wide participation of local and regional actors, as well as a media impact on the management of the Natura 2000 network in Mediterranean Fluvial and Wetlands. In this way, knowledge about the objectives and results of this project will reach the sector segments involved and will be widely known.

Two seminars have been held up to the date, and since it was decided to split the initial seminar into two days, the first informative took place on 05/23/2013, while the second had a more technical content and was held on 06/24/2013. The first day was held at the PRAE headquarters, and was attended by about 40 people. First Informative Seminar Summary.

The second day also took place at the PRAE headquarters, where 50 people attended. In this case of a more technical profile, but also linked to the world of water and natural.

It has been considered appropriate to hold a single event instead of two, that meets the objectives that were intended with the second and third informative seminars: presentation of results and closure of the project. The event is scheduled to take place during the month of December 2018.